Axemaster was formed in 1985 by lead guitarist Joe Sims. The project and music has stood the test of time and remains strong after over 35 years.

Several lineup changes followed as the band recorded their next 2 releases: "Death Before Dishonor" (full length cassette, European-only release) and "5 Demons (Imperative is their Demise)" (self-released EP cassette). Joe Sims is the only original member to remain and play on every release. After this the band altered their musical direction and changed the name to The Awakening.

Four years later, Unisound Records {Greece} re-issued selected songs from 4 of the band’s releases (as well as 3 songs by The Awakening) on a CD titled "Axemaster & The Awakening, 1985-1995". In 2002 Unisound re-released "Death Before Dishonor" (as well as some unreleased material) on CD. The success of these discs proved that Axemaster's music remained in demand although the band had been inactive for several years.

The band's original lineup briefly re-united in 2007 and re-released "Blessing in the Skies" on disc through Burning Star Records {Greece}. The reunion was short-lived however, and the remaining members moved on to do a studio project under the name Inner Terror.

In 2010, Sims permanently re-launched Axemaster and over the next couple years, started work on a new album with a lineup that included the band's current vocalist Geoff McGraw. Then, in 2014, the band signed a worldwide recording and publishing deal with Pure Steel Records (Germany), and released the full length album "Overture to Madness" in the following year.

After taking a year to play shows in support of "Overture" and writing new material, Axemaster hit the studio in 2016 to record a new album ("Crawling Chaos") which was released by Pure Steel in late 2017.

"Crawling Chaos" includes 10 tracks with major label sound and the signature Axemaster style (a mix of traditional metal, doom metal, and thrash metal), that shows the band's evolution while still paying respect to their metal roots. The album has gotten rave reviews worldwide (both in webzines and on radio), which helps to affirm the general belief that it has all the elements necessary to become the most memorable Axemaster album to date.

Shortly in advance of the new album, Pure Steel re-released a collection of the band's material from the 80's and early 90's as a collectable vinyl 2 record set titled "Blessing in the Skies (and other cuts from the chamber)". The album includes all the material from "Blessing in the Skies" and "5 Demons", as well as several additional songs. All of the material was re-mastered which GREATLY improved the sound of all the tracks.

Axemaster's unique blend of styles has proven to be a combination that appeals to metal fans from 2 different generations. This, coupled with the large amount of worldwide exposure they have received over the years, and the band's resolve to keep moving forward, gives cause to expect that Axemaster will continue to achieve greater success in the future! 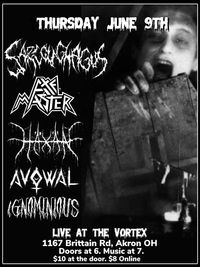 Axemaster at The Vortex

AXEMASTER with Gates of Babylon & Dysplacer

"Chaos" Is Available Directly From Axemaster!

You can buy "Crawling Chaos" and other Axe & Axe related releases, merch, and collectables directly from us! JUST DROP BY THE WEBSTORE!!!!!